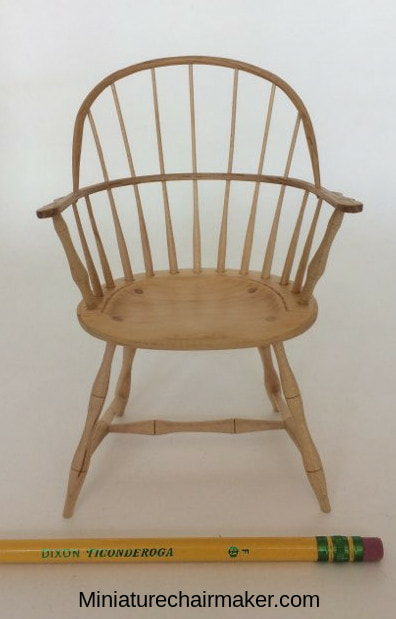 "But, like most furniture styles brought here from Europe, the Windsor chair was swiftly transformed until it had a distinct American character." (1), with chair makers in Philadelphia, NY, RI, Connecticut, and other places each having their own ideas about the turning patterns for legs, rails, and arm posts, as they also had on earlier Windsors.

"The term sack-back is, supposedly, derived from the practice of pulling a sack, fashioned from a popular fabric of the time, and trimmed with ribbons, over the back of the chair and securing it to the arm rail with the ribbons, the purpose being to shield the sitter from drafts in chilly rooms." (2)

This 1/6th scale model of the sack-back Windsor is based on the drawings for a full size chair found in Make a Windsor Chair by Mike Dunbar.

The legs, rails, and arm posts are turned to simulate bamboo. This design feature was incorporated into furniture following the publication in 1757 of Sir William Chamber's Design of Chinese Buildings, Furniture, Dresses, Machines, and Utensils, which was the result of three trading voyages he made to China in the 1740s.